By The Nursery
Posted June 13, 2021
In Farm School, Health & wellbeing, Outings, The Nursery
Farm School – it’s hotting up!2021-06-132022-06-24https://thenursery.uk.com/wp-content/uploads/the-nursery-brand-identity-700.pngThe Nurseryhttps://thenursery.uk.com/wp-content/uploads/the-nursery-brand-identity-700.png200px200px
0
This week we learnt about fire safety at the farm as the children found a fire pit in Pixie Wood. The children thought really hard and came up with some really sensible ideas such as not touching the flames and listening carefully to the adults. We also spoke about what equipment we might need to keep safe and how we would use it. Well done Pre School.
The children discovered a play house this week which inspired their imaginations and they role played lots of different scenarios and games. It was also a great way to include maths in their play as they had to work out how many children could go into the house at once and what space they had.
The children have learnt the routine of what the horses need to care for them and without prompting they made hay nets, filled water buckets, fed the horses and made sure their stables were ready for them.  The children’s confidence around the big animals is also increasing so much and they hand fed the horses apples as a treat. We even had Ruby the donkey join us for snack this week and it was so sweet as she followed the children and waited so patiently for her piece of apple.
The farm is having such a positive impact on the children’s emotional well being and the children are so excited to go each week.
donkey, Farm School fire, horses, Pixie Wood, playhouse
Recommended Posts
Categories
Archives 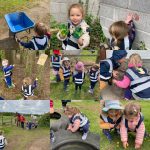 Farm School – on top of the world!Activities, Farm School, The Nursery 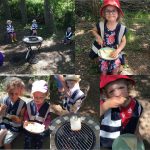